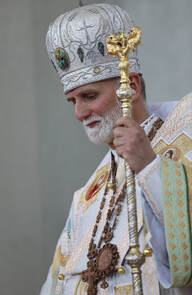 The Patriarch was born on 24th of November 1960 in Syracuse, NY.
Ordained priest on 26 November, 1998 in Lviv, Ukraine and Consecrated a bishop 26 August 2012 in Lviv, Ukraine.
Installation as Archbishop-Metropolitan on 4th of June 2019. 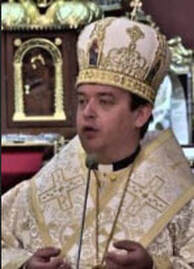 Our Bishop is the Most. Rev. Andriy Rabiy, the Auxiliary Bishop for Ukrainian Catholic Archeparchy of the Philadelphia.

Bishop Andryiy was born the 1st of October in 1975 in Ukraine.
​Ordained priest on 9th of December 2001 in Philadelphia, PA.
Consecration on 3rd of September, 2017 in Lviv,  Ukraine.
Apostolic Administrator since April 16, 2018 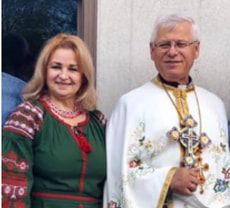 ​Rev. Vasyl Sivinskyi is our Parish Priest and Pastor with his wife, Hayla, as the “Panyi Matka” of our parish.
They are the parents of three children and six grandchildren.
Fr. Vasyl Sivinskyi was born 8th of January 1952 and was ordained on the 22nd November, 1992.

​The Byzantine Tradition of the Church we have conserved the tradition of married priests.
This sacred tradition is found in the New Testament (Titus 1:6ff). “Panyi Matka” is one of the terms used to both address and refer to the priest’s wife. The term means roughly “Reverend Mother.” Other names used in Byzantine Churches for the priest’s wife are: Panyi (also Ukrainian), Presbytera (Greek), Matyushka (Rusyn) – indicating that the priest’s wife in a very real sense shares in the priesthood of her husband and in good works.

Father Vasyl is sometimes assisted by Mr. Stephen Wernyj or Mr. Francis Rodriguez.
​
In 2012, St. Michael the Archangel Church, a community of faith of the Ukrainian Byzantine Catholic Church, celebrated 100 years of foundation.
The community gathered first in houses, a neighboring Polish church, blessed to build a church on Wolfe Street and now on Eastern Ave.
For 100 years St. Michael the Archangel has been standing guard for us here in Baltimore, Maryland.
For years the Gospel of Jesus Christ has been preached. For 100 years graces have been given to us through the Holy Mysteries (the sacraments).
​For 100 years the people have been listening, believing in God and putting the Gospel into action.
The angels are well known in sacred Scripture, in Catholic theology, in our lives; they inform, protect, and guide us as we make the path of living our Catholic faith. The angels provoke us to deeper faith in Jesus Christ as Lord and Savior.